Rennes is a member of the royal family, a student at the Royal Academy, and the main antagonist during the Tournament arc. He was widely considered the most gifted prodigy of the school and the favorite to win the tournament until he was crippled and defeated by Xiang Ye in the finals.

While initially appearing honorable and noble, Rennes is in truth presumptuous and egocentric. He doesn't brag about his abilities, but he does disdain seemingly talentless people like Xiang Ye. He does not like to be told "no" (Which has been seen with his multiple advances towards Isabella) as he is used to getting his way because of his talent and position as a prince. Although he is extremely adept at casting spells, he is a menace to both friend and foe, as he casts powerful spells without any regard for innocents. He absolutely hates it when someone is able to even scratch him, retaliating with the most powerful spells at his disposal. During his fight with Xiang Ye, Rennes becomes increasingly unstable with rage, laughing like a lunatic while screaming insults at Xiang Ye. Xiang Ye exploits this by taunting Rennes and luring him into his trap, defeating him.

After his defeat at Xiang Ye's hand (as well as the permanent scarring of his body), Rennes has fallen into a deep state of depression, becoming a victim of bullying for those who he belittled.

Tols Family: Rennes was originally an outcast among his family due to his lineage and dangerous power. After he was able to hone his abilities he gain great respect, admiration, as well as fear among the royals. While Rennes holds his brother The Regent in high regards he looks down on his nephews as he considers them embarrassments to their family because of their greed and abuse of power. During the Kingdom Cup Tournament, when Rennes discovered his nephews were responsible for endangering the lives of the other contestants he threatened to kill them should they ever do something similar again.

Yi Bei: Like everyone else at the academy, Rennes was infatuated with Yi Bei for her beauty and power, though unlike most people he tried to be more respective towards her. Despite knowing she was married to Xiang Ye, he continued to court Yi Bei on multiple occasions which Yi Bei always rejected. This only angered Rennes as he was always use to getting what he wanted and was jealous that someone like Yi Bei was with Xiang Ye. During the final battle in the Tournament, Rennes challenged Xiang Ye to a death match, making no secret of his intentions of killing Xiang Ye so that he could covet Yi Bei.

Xiang Ye: At first Rennes did not think much of Xiang Ye and only regarded him as “useless lumber” but was jealous of his relationship with Yi Bei. The two however would form a rivalry during the Kingdom Cup Tournament. After witnessed Xiang Ye defeat Bushi in the first round of the tournament, Rennes began to fear that Xiang Ye might be his match and attempted to get Xiang Ye to drop out of the tournament. Xiang Ye felt insulted by his attempts and swore to defeat Rennes in the finals of the tournament which further infuriated Rennes. When the two met again in the arena Rennes challenged Xiang Ye to a death match as he believed Xiang Ye disrespected and insulted him as a prince and a magician, as well as wanting to take Yi Bei for himself. As they fought Rennes’s determination to kill Xiang Ye became his obsession the longer their fight continued. He became increasingly unstable and reckless as he refused to treat Xiang Ye as a serious opponent. This would be his downfall as his overconfidence and recklessness in his fight with Xiang Ye resulted in his defeat. After his defeat and losing his sight and his arm, Rennes holds no ill will towards Xiang Ye as he admits that his current state was his own doing.

At the beginning of the series, he is shown to be tall and handsome, with many of the female characters commenting on his looks. He has long black hair with blue eyes. However, his battle with Xiang Ye left him blind, emaciated and missing his right arm.

Rennes is first introduced in chapter 18. Later he intervenes in the fight with Isabella and Buri when the young royal cheats in their sparring match by using boundary force. He carries Isabella (under the name Yi Bei) to safety and is surprised when he discovers her marriage to Xiang Ye.

He appears again in chapter 44 when he defends the forging class from his nephews and the purple dragon knights. Rennes scolded and overwhelmed his nephews with his Boundary Force as a warning to never embarrass their royal family name again.

Rennes is not really seen again until the beginning of the Kingdom Cup Tournament to which he is the favorite to win that year.

At the beginning of the round, he asks Isabella if she wants to cross the river together but is immediately shot down as she favored her husband. Irritated he used his magic to cross the lake more quickly than anyone else. He also quickly defeats the Void King.

In the Wind Valley, he quickly disposes of three golems that threatened Tols Buri, Bushi, Buno. Upon realizing they were the ones who started the forest fire earlier he threatened them by saying. "Pull a stunt like that again and I will end you."

Rennes vs. Zhou Lun Tana. In this round, Rennes encouraged his opponent to give up since he claimed she had no chance of winning against him. She declined his request to forfeit and was beaten without much hassle from Rennes who dominated the fight without much effort. The battle was stopped by Vasily Andre before his opponent received fatal injuries.

Rennes vs Yuri. Seeing the results of his last battle his opponent quickly forfeited knowing that she would not have been able to beat him.

Before this round, bad blood began to form between him and Xiang Ye who vowed to defeat him. Offended and angered by his opponent's attitude towards him, Rennes demanded and was granted a battle to the death by the king. When asked his reasons he stated that Xiang Ye was disrespectful towards his position as a prince and was undeserving of a woman as fine as Yi Bei (Isabella).

The battle started with Rennes thinking that he instantly killed Xiang Ye, but it turned out that he created a large mech out of the indestructible Useless Lumber. While Rennes was able to force Xiang Ye out of the Mech, he was surprised to find out that Xiang Ye created an armor out of the same material which was used for the rest of the fight. Still confident in himself Rennes continued to attack with the hopes of killing Xiang Ye quickly. However, Xiang Ye was able to land a hit on the cocky mage, shattering his pride. Angered, Rennes found it unacceptable for him to be damaged by the one he once considered below him and continued to attack mercilessly, dropping his guard. This allowed Xiang Ye to use his laser beam and scarring his face. This forced Rennes to use the full extent of his magic eye to try and kill his opponent. Before he could though Xiang Ye used a controlled hydrogen bomb with the attempt to take him out. While the explosion didn't kill Rennes it did severely injure him forcing him to use his dragon form. While Rennes thought he was at an advantage, Xiang Ye cut his arm off using a laser beam. While this didn't kill him, the radiation from the hydrogen bomb crippled and blinded Rennes, rapidly ageing him. Rennes attempted one last attack on Xiang Ye, but was too feeble to do so. Xiang Ye punches Rennes, knocking him out and is declared the champion.

After his defeat, Rennes was on the verge of death but saved by Principal Vasily Andre. While he was able to save Rennes' life this left the young mage with multiple scars, a missing arm, and was left blinded by the radiation.

Boundary Force: As a member of the Mage class at the royal academy, Rennes is incredibly skilled in his usage of Boundary Force or alternatively know as Magic. He is able to channel his boundary force into various spells that can cause some devastating effects and his aura alone is strong enough to exert pressure on the heart. Rennes was once considered the most gifted student of the Magic class as well as the elite of the Royal Academy. Rennes lost most of his abilities after the ill-fated battle against Xiang Ye. 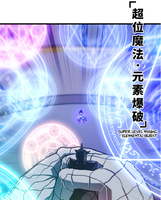 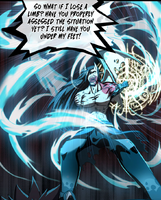 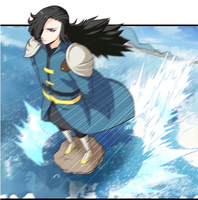 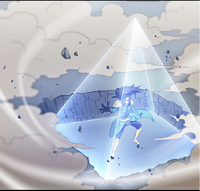 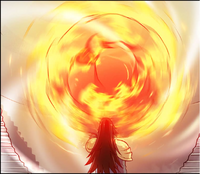 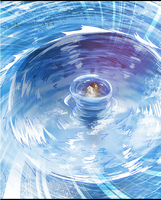 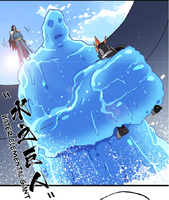 Iris of Magic: Rennes inherited whats known as the Iris of Magic in his right eye. It very rare magic that can only be obtained if you share the lost bloodline of the Barol Tribe. It allows the user to absorb all types of magic into it whether the user wants to or not. It also continuously increases ones magic power without end towards infinity. However Rennes can only use it up to 15 minutes at a time. Rennes loses its use due to his serious injuries he sustained while fighting Xiang Ye. 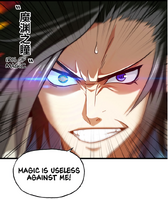 Spirit Summoning" Rennes is able to summon an Imp spirit which can absorb the massive fire ball created by Xiang Ye's nuclear weapon. However it can only be used once per fight.

Dragon Form: As a member of the Royal Family Rennes possess the ability to transform into a half dragon hybrid. This form allows the user to greatly enhance their physical and magical power upwards to 10 times their base form although this varies from person to person 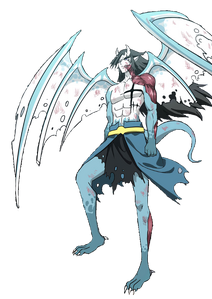 Add a photo to this gallery
Retrieved from "https://my-wife-is-a-demon-queen.fandom.com/wiki/Tols_Rennes?oldid=1120"
Community content is available under CC-BY-SA unless otherwise noted.